Or so they say. And is it really necessary?

According to Mashable, an iPad mini will be released in time for the holidays. But wait, isn’t that an iPhone? Or even an iPod Touch? I know, I know… my thoughts exactly. 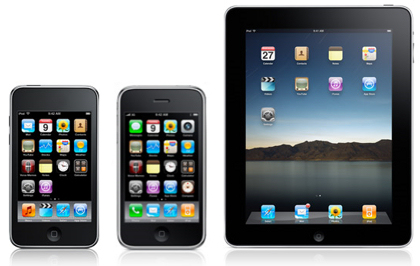 This article states that the supposed iPad mini would have a screen size of about 7-8 inches, versus the almost 10 inches on the iPad and 3.5 (diagonal) inches of the iPhone 4S. But, is it an iPad Mini really and truly worth it? Maybe, if Apple does it right.

The iPad Mini would be ground breaking (maybe that’s an exaggeration) and truly give Apple competitors (Kindle Fire, anyone?) something to be scared of if it meets several very important criteria…

– CHEAPER. People would not want to fork over over $500 for a smaller version of the iPad 2 or 3 with a few worse specs (Rumor is that retina display would not be up to par, and I would imagine a few other qualities would diminish as well…) And the only way it will get competitors shaking in their boots is if it matches a bit more closely to competitor prices

– DURABILITY. Right now, it is not uncommon for many toddlers or other youngsters to be seen on their parents iPads. It also is not uncommon for college or even high school students to have their own for educational purposes. I know that if I were a parent, I would NOT want to buy my 16-year-old an iPad. They’re expensive merchandise that can break pretty easily and rank up a hefty repair price very easily.

– EDUCATION. While on the topic of students using iPads for education, I did some research on iTunes U and how it could very easily change the world of education. I believe iPads could play a very large role in this as well. If Apple could create some sort of iPad (perhaps the Mini, if it is cheaper and durable) that works well with students/teachers (Maybe certain features? New Apps?) it could change the world of education. It could easily go hand-in-hand with iTunes U and suddenly be in classrooms across the nation. That would certainly make Apple proud.

Bottom Line: An iPad Mini is unnecessary. Maybe Apple thinks the market is getting bored with bouncing back and forth from iPad to iPhone and thinks they need to introduce something new. But if that’s the road they want to go down, maybe they should put more energy in perfecting AppleTV and creating new, innovative ideas. Not just downsizing something that already has 3 devices that can (more or less) do the same thing.

So what do you think? Is the iPad Mini a necessity or not so much?

I want to hear what you have to say! Cancel reply